A delegation from the Moscow Government visited Morocco 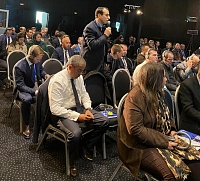 A delegation from the Moscow Government visited Morocco

The purpose of the visit was to expand Russian-African interregional cooperation, strengthen partnership with Morocco, organize joint projects in the field of urban development, information technology, tourism.

The representatives of the Moscow delegation held a series of working meetings: with the leadership of the region Casablanca Settat, with the President of the region Rabat Sale-Kenitra Abdessamad Seckal, representatives of the General Confederation of Enterprises of Morocco in Rabat (CGEM). The Department also held an official meeting with Wali of the Rabat Sale-Kenitra region, Mohamed Yacoubi.

On December 16, a round table was held with representatives of the Coordinating Council of Organizations of Russian Compatriots living in Morocco (CGEM). The participants considered and discussed the optimal and promising ways of cooperation between the associations of compatriots of Morocco and the Government of Moscow, the Moscow House of Compatriot, the Embassy of Russia and the representation of Rossotrudnichestvo.

On 18 December the conference "Bilateral Cooperation between Moscow and the Cities of the Kingdom of Morocco" concerning foreign economic and investment cooperation between Moscow and the cities of Morocco as well as the round table "Digital Transformation and the Formation of the Global Digital Space" were held. Priorities, Prospects, Key Projects". The representatives of the Moscow delegation discussed with their foreign colleagues the prospects of cooperation in the fields of economy, urban development, trade, culture, tourism, etc.

The program of the visit also included a presentation of Russian cuisine with tasting traditional dishes, opening of the photo exhibition "Festival Moscow", a protocol event with a concert of the creative team.

The direct organizer of the visit program was the Moscow Center for International Cooperation.